SERVING THE HIGH PRESSURE INDUSTRY SINCE 2008

Maximator Test LLC provides innovative and cost-effective services for your high-pressure testing requirements with experienced technicians who perform testing quickly and reliably.  Our services provide the opportunity to determine the performance parameters and quality features of your products while still in the prototype stage and under real-life conditions.

Maximator Test LLC provides a full range of high-pressure testing services, including Proof Testing, Leak Testing, Burst Testing, Pressure Fatigue / Impulse Testing, and Autofrettage.  Our mission is to provide unrivaled service to our customers. Our goal is to under promise and over deliver.

Proof Testing is a non-destructive test used to verify if a component or system can withstand a pressure above the design or operating pressure without permanent deformation or leakage.

Leak Testing is a form of proof testing.  The unit under test is pressurized and visually inspected for leaks. Often this is done by immersing the part in water or other clear liquid then pressurizing with air, Nitrogen or Helium. Leaks can also be verified through leak detection fluid or changes in pressure. This is a simple and versatile test.

Burst Testing is a destructive test which establishes the pressure that causes a component or system to permanently deform. Burst Testing also establishes how the failure occurs, be it excessive leakage or catastrophic failure.

Autofrettage is a technique used on tubular metal components in which enormous amounts of internal pressure causes portions of the part to yield plastically, resulting in internal compressive residual stresses once the pressure is released.  The goal of autofrettage is to increase the durability and fatigue life of the final product. 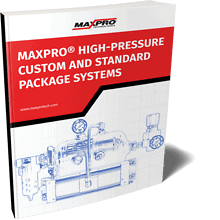 Get your FREE ebook